We decided to go brave the freezing, frozen tundra of Iceland in February to attempt to see the northern lights. And might I add, totally worth it! 🇮🇸

Day 1 – After a 7 hour plane ride with my babygirl, we land and are stuck on the plane for another hour due to 40mph winds whipping by. They’re so strong it feels like the plane is rolling!! But after finally getting off the plane, getting our luggage (which also took forever due to the wind) and getting our rental car, we were off to do some exploring.

My initial thought was “my god, this country is beautiful!” Even with winter everywhere, the mountains and landscapes had so much to offer. I couldn’t wait to go exploring.

We head out south to go try and look at a famous Volcano but unfortunately the road is closed due to the weather and unsafe road conditions so we head into Reykjavík to see what kind of shopping we could find. And of course we hit the Hard Rock for Skara’s pin!

After walking around a bit, we’re all pretty jet leg so we decide to head in early and catch up on some sleep. When Mike goes out to get dinner, he walks out our hotel door and sees the Northern Lights!!!

But at least one of us got to!

Day 2 – We get up nice and early and head out to see the famous Golden Circle, and all that it encompasses. This I think may have been my favorite day of the trip. The sights were amazing. And we even saw an orange kitty named Gosi, Icelandic for eruption. We stopped at Kratom volcano, a famous crater that you can even swim in during warmer weather. We saw the famous town of Geysir with, you guessed it, two famous active Geysir a named Strokkur and Geysir. We even saw Strokkur erupt! We saw the beautiful Gullfoss which was breathtaking. And then we went to the Thingvellir National Park and got to walk between the two tech-tonic plates of North America and Euroasia. 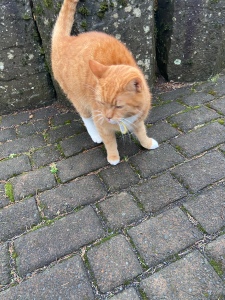 Day 3 – Today we stayed around Reykjavík again. We went to the Reykjavík Zoo and saw reindeer, Icelandic horses and arctic foxes, amongst some other animals. We then went shopping again in Reykjavík and saw some of the famous sights to see there, including The Sun Voyager and the Hallgrimur church. 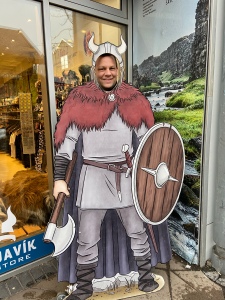 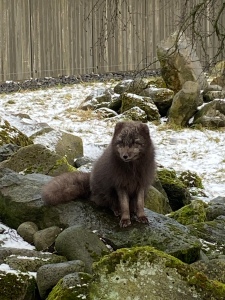 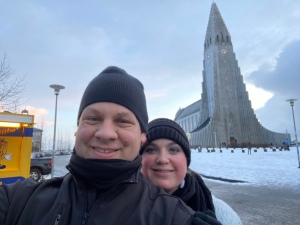 Day 4 – Today was our long day. And one of the worst as far as weather goes. It snowed all day. We drove out past Selfoss to see the beautiful, and dangerous, Reynisfjara (Black Sands Beach) along with the famous arch, Dyrhólaey, and Reynisdrangur (3 pillars) that are, as history has it, 3 trolls that didn’t make it in before sunrise and turned to stone. The waves that crash onto this beach are straight from Antarctica as there is no land between the two at this southern most point of Iceland.

We were really hoping to drive out to Diamond Beach and see where parts of glaciers were washed out to sea but the weather was just too treacherous for us so we had to head back towards Reykjavík. We stopped at the Volcano Center to get a really good look at Hekla and headed back to start packing up.

Day 5 – Our last day before we get on the plane to head back home. We got up early and headed out to see the famous Blue Lagoon and get our certificate for walking across the bridge connecting the two tech tonic plates at Leif the Lucky’s Bridge. It was FREEZING this day. We also got to see an active Geysir and the smell was pretty rotten 🤣 but the sights were beautiful!

We also got a beautiful view of Greenland 🇬🇱 on the airplane. Another trip soon? I think so! ✈️ 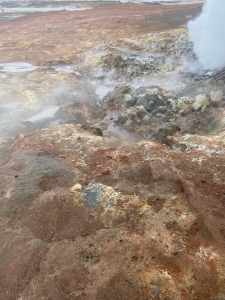 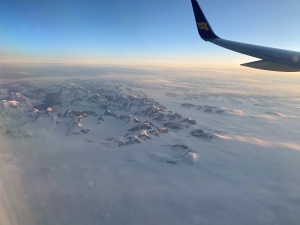